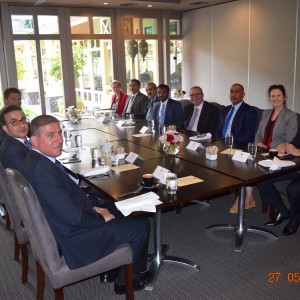 The Council of Arab Ambassadors invited Mr Stuart Horne,  the Acting Manager of Middle East and North Africa Division at New Zealand  Ministry of Foreign Affairs and Trade, to a business Lunch on May 25 during his visit to Canberra.

The visiting guest has reiterated his Government commitment to a just and comprehensive solution to the Israel – Palestine conflict including the establishment of  a Palestinian state in accordance with International  Law and UN resolutions.

Mr Horne has also reiterated the position of New Zealand towards the Israeli settlement activities as being illegal by International law.

As a non-permanent member of the Security Council, Mr Horne confirmed New Zealand’s strong belief that the Security Council has the main responsibility in finding  a solution to the Israel- Palestine conflict and that it is high time to issue a resolution by the SC in support of the two sate solution and to find the adequate implementation mechanism to achieve it.

In this regard, Mr Horne expressed his support for the current International initiatives to resume talks between Israel and Palestine including the French  and the Egyptian Initiatives.  He welcomed the forthcoming Quartet statement expected to be released at the end of the month.

In addition, Ambassador Abdulhadi has raised the issue of the dire political and socio-economic situation in the Yarmouk Refugee Camp and the urgent assistance needed to support the Palestinian refugees including an immediate financial support to UNRWA.

Other Middle East issues have been also discussed including the situation in Syria, Iraq, Yemen and Libya.