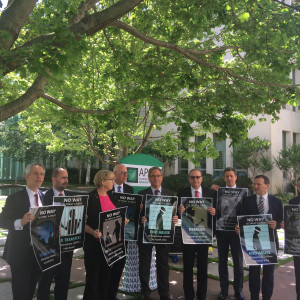 49 Parliamantarian have signed a motion last week calling for fair treatment of the Palestinian children in the Israeli detention centers. In order to show their support to the issued statement and make public, some of the Australian Parliamentarians have attend a media conference this morning, November 27 at the Parliament House in Canberra organized by the Palestine Australia Advocacy Network (APAN).

The media conference has been attended by Ambassador of the State of Palestine, Izzat Abdulhadi who thanked the australian Parliamentarians for their support to Palestinian children in detention and highlighted  the continuos Israeli violation the Palestinians human rights.

The following is the full text of the motion:

Israel is the only country in the world that automatically prosecutes children in military courts. And only Palestinian children. Up to 700 Palestinian children are arrested each year by the Israeli military, and this number is increasing. UNICEF reports that ill-treatment of Palestinian children is “widespread, systematic, and institutionalized throughout the process”. Children as young as 11 are detained by the military.  According to well documented research, almost all children have no parent or legal counsel during interrogation; 75% report physical violence; a quarter are made to sign documentation in Hebrew, a language they do not understand; 60% are transferred into prisons in Israel meaning family usually cannot visit. Military courts have a 99% conviction rate for Palestinian defendants.

resort, and if they are detained, to immediately institute protections for those children

including that their safety and best interests are prioritised, and that they are permitted a