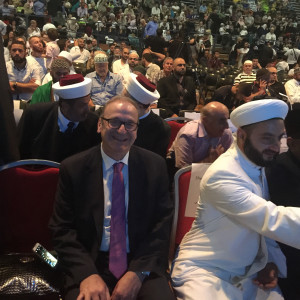 The Islamic High Council of Australia celebrated the birthday of Prophet Mohammed, peace upon him, on Sunday, December 12 in Sydney.

The Mawlid was an opportunity for the Muslim community in NSW (more than 5000 attended) to introduce their joy of the Birthday of Prophet Mohammad through very special and cheerful songs and significant Concert. The main message of the songs and the event was to show the peaceful nature of Islam,   to condemn all types of terrorism and extremism and to highlight the fact that Islam is merciful for all people in the globe and a guide from darkness to light.

It was a cheerful and happy occasion and a source of joy and unity.