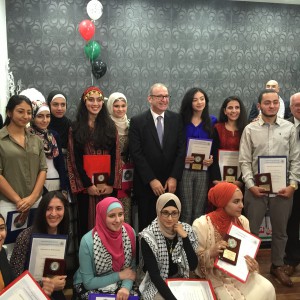 The Union of the Palestinian Workers organized on May 15 in Sydney a function to commemorate  the  68th anniversary of Al Nakba  in Sydney.

It’s a privilege to be with you tonight, though it is an evening of mixed emotions.

Many of you here tonight are children and grandchildren of 1948. The tragedy of the Nakba remains with you, as it remains with all Palestinians. We mourn the deaths of our family members, the loss and confiscation of our lands and homes, and the reality that as a people, we have never been given what is our natural right: the right to return to our homeland.

The refugee camps, established to deal with what was to be a temporary problem, still stand and now have 3rd and 4th generation refugees living in poverty, unable to build a secure life and yet unable to return home. Over half a million of our refugees live in Gaza alone.

Israel’s ethnic cleansing has gone on since 1948 and it goes on today. In East Jerusalem, we have the systematic cancellation of residency, which is reducing the Palestinian population. We see Israel’s policy of Judaisation: changing Palestinian names to Hebrew names, starving Palestinian neighbourhoods of normal everyday services, slowly strangling them by denying building permits and cutting off their access to Jerusalem, the demolition of Palestinian homes, and violently expelling Palestinians from the homes that have been theirs for generations and giving these homes to settlers.

Where there is no land to steal and to expel us from, Israel’s tries to deny our existence and steal our identity, our history and our culture – our very being.

Three years ago in Australia, we saw a joint Israel Post and Australia Post stamp commemorating the Battle of Beersheba as a part of the history of Israel. The New South Wales Board of Deputies publishes maps on its website showing the West Bank as Judea and Samaria: today and right here. In shops in Sydney, our food: hummous, felafel and maftoul, are sold as Israeli.

And yet despite Israel’s best efforts, here we are today – Palestinian and proud! We are growing our communities and asserting our identity. You are making your place and your mark in Australia, and are doing this as part of the international Palestinian community.

The Nakba was a tragedy, but it was a failure. Instead of the erasure which Israel attempted, we’ve refused to be forgotten, and slowly but systematically, we’re recovering our rights. 1948 saw Palestine disappear from the map, 1967 brought the occupation and through all of this, we’ve kept our struggle alive; the struggle for the right to determine our own future in our own land.

Palestine is now a state and yes, many challenges remain. The occupation remains. The development of the structures, institutions and economy of a state continues. Our sovereignty is not secured. There is a lot to be done.

But Palestine is a state recognised by 138 countries and Palestine is asserting its rights as a state in the international arena, so as to guarantee its independence and the rights of Palestinian people. These rights cannot be taken away.

Australia is one of the few countries which don’t formally recognise Palestine as a state. Yet the Australian government signs agreements with the government of the State of Palestine; education agreements, agricultural agreements, aid agreements and more.

As Palestinian people, we’re here tonight proudly celebrating the successes of the young people who are the next generation of vocal, active, engaged Australian-Palestinians. Your voices are the voices of Palestine in Australia; the voices which the Australian government and the Australian people hear, and need to hear more.

Those who think change is not possible here in Australia – change such as mobilising the Australian people and changing the position of the government, are wrong. Change takes time and it takes the commitment of people working together. In 1948 when Palestine disappeared from the map, there were those who thought this was the end. Israel for one, liked to think it was the end of Palestine, but how wrong they were.

Just as we’ve seen the return of Palestine; first to the map, then as a state, and now as an actor in the international arena, change can be made to happen in Australia through joint efforts, organisation, commitment, coordinated action, and leadership.

In the time I’ve been here in Australia, I’ve seen public attitudes to Palestine change. The response to Palestine used to be ‘Where’s that?’ Now, we have an altered Labor policy on Palestine and we have the Liberal Party struggling to hold a believable position about Palestine and the occupation.

We live in changing times and your voices need to be heard as the authentic voices of Palestine in Australia. Your voices, your opinions, your choices and your actions have the power to influence and to make change.

The Nakba marks all our lives and it remains with us. It will remain with us until Israel acknowledges its violence and the injustice Palestinian people have experienced, and continue to experience. In 1948, the Nakba handed us a future of loss, emptiness and defeat. As Palestinian people, we’ve taken the loss and turned it into success, achievements, a State, and a place in the world.

Each one of you is a powerful human story of the success which Palestinian people have created from loss. I celebrate your success, and I am honoured to be with you tonight.