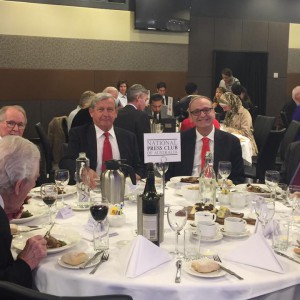 The Palestinian Embassy team attended a luncheon and lecture by Professor John Dugard at the National Press Club of Australia.

Professor Dugard, former UN Special Rapporteur for Human Rights in Palestine and Judge on the International Court of Justice, spoke informatively on the topic of: The US elections and the implications for Palestine and Israel, including factors which may influence the re-calibration of Middle East policies of US allies, including Australia.

The lecture was followed by a question and answer session that spanned a number of other topics including situating the Israel-Palestine conflict within the broader context of the Middle-East and comparing the system of occupation of Palestine by Israel to the South African apartheid system.

The luncheon and lecture was hosted by the Australia Palestine Advocacy Network (APAN), who did an excellent job in organising the event.