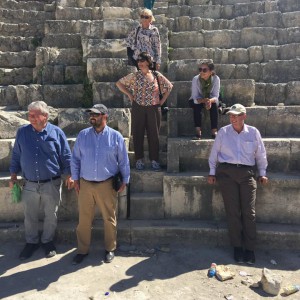 The Australian Parliamentary Delegation have finished their fruitful and productive visit to Palestine.

During the final three days of their trip, the delegation visited the beautiful city of Nablus, where they had a chance to meet with the local Samaritan community, have a tour of the historical old city, eat some delicious Nabulsi Knafeh, and visit the historical roman ruins in the nearby village of Sebastia. The delegation listened attentively as they were informed of the Israeli attempts to control Palestinian tourist sites and their abuse of Palestinian cultural heritage.

During their visit to the city of Qalqilya, the delegation had the opportunity to see how the Israeli Separation Barrier surrounds the city, having a devastating effect on the lives of its Palestinian inhabitants. Members of the delegation were inspired by the steadfastness and resilience of the Palestinians of Qalqilya.

On their final day, the delegation visited the city of Jerusalem, where they were delighted to spend time at the Al Aqsa Mosque, the Church of the Holy Sepulcher, the Western Wall, and the rest of the beautiful old city. They also listened to a presentation by the Palestinian Academic Society for the Study of the International Affairs (PASSIA) about the situation in Jerusalem and the Israeli violations of Palestinian rights in the city.

The delegation’s final meeting in Ramallah was with the Minister for Palestinian Prisoners, who explained the suffering of these prisoners and the reasoning behind their current hunger strike, calling upon the Australian Government to put pressure on the Israeli Government to respond to the legitimate humanitarian demands of these prisoners.