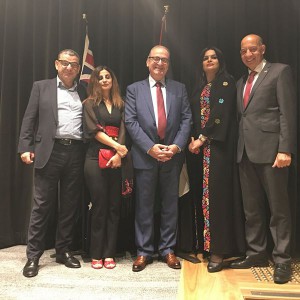 “The Palestinian National Council issued the Palestinian Declaration of Independence on November 15, 1988, declaring an independent Palestinian state on the 1967 borders with East Jerusalem as its capital. With this, the Palestinian leadership proclaimed its support for the two-state solution, international law and United Nations resolutions, as well as its unwavering commitment to the inalienable rights of the Palestinian people.

Thirty years later, following this historic and painful compromise, the longest occupation in modern history still continues to hold an entire people captive, willfully stealing their land, resources, freedom and rights with full impunity. Israel’s policies to negate the Palestinian narrative, identity, presence and continuity on the land, and to impose ‘Greater Israel’ on all of historic Palestine, are part of an ongoing aggression which began with the Nakba in 1948. Such measures continue to be an affront to the values that govern international human rights and the global rule of law.

The Palestinian Declaration of Independence clearly articulates the values and principles on which the sovereign Palestinian state should be built. In the spirit of Palestinian Independence Day, it is incumbent upon the Palestinian leadership to safeguard the fundamental rights and freedoms of all Palestinians and to maintain a just and democratic system of good governance based on a rule of law. As a matter of urgency, it is also vital to end the political rift and to achieve a genuine reconciliation while revitalizing and reforming the whole political system in Palestine.

The quest for Palestinian rights, freedom and independence can be attained by the establishment of the viable, contiguous and democratic Palestinian state with East Jerusalem as its capital, and the achievement of a just and legal solution to the plight of Palestinian refugees.

On the occasion of Palestine’s Independence Day, we appeal to the international community and people of conscience to intervene immediately and to exhibit the political will necessary to hold Israel accountable with punitive measures and sanctions for its systematic policies of displacement, destruction and oppression. Any commitment to a just and durable peace requires the recognition and empowerment of the State of Palestine along with serious and effective measures to end the Israeli occupation with all its manifestations, including the illegal annexation and ethnic cleansing of Jerusalem, the cruel siege of and military incursions on Gaza, the captivity and fragmentation of the occupied West Bank, and the illegal settlement enterprise with its theft of land and resources.

Despite Israel’s ongoing violence, colonialist expansion and system of apartheid, the resilience and determination of our people to maintain our humanity and to attain our rights remain resolute and constant. No degree of oppression or injustice can defeat the will or the spirit of a people determined to achieve their liberty, justice and dignity.”