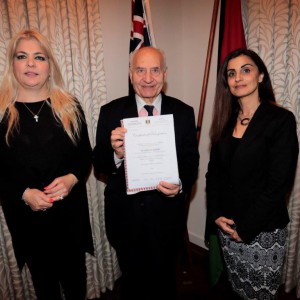 On the evening of Wednesday 8 August, a delegation from the Association for the Development of Arabic Poetry and Heritage headed by Dr Bahia (Betty) Abou-Hamad visited the Palestinian Delegation so that their guest of honour, Professor Rifaat Ebied, Foundation Professor of Semitic Studies at the University of Sydney, could offer his gratitude to Ambassador Abdulhadi for his ongoing support for the Association and its efforts to amplify the voices of Arab intellectuals and poets in Australia. Professor Ebied had received a certificate of recognition from Ambassador Abdulhadi acknowledging his many contributions and achievements in the fields of literature and language studies.

As Chargé d’Affaires, Ms Suheir Gedeon received the fourteen-strong delegation on Ambassador Abdulhadi’s behalf and discussed with them some key issues relating to the Association’s work and activities. She also extended her appreciation for their warm conversation.