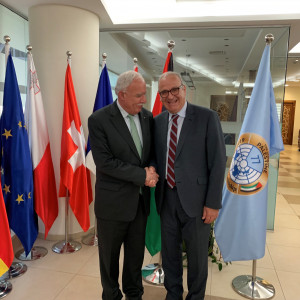 Ambassador Abdulhadi met with the Foreign Minister, HE Dr Riad Malki, during his most recent visit to Palestine in August/September 2019. The Ambassador briefed the Minister on the current political environments in Australia, New Zealand and the Pacific countries, and situated his analysis in the wider context of Indo-Pacific regional influences and developments. The Ambassador also informed the Minister of the strategic plan of the Palestinian embassy, and of the various programs that have been implemented so far.

The Minister outlined and analysed the most significant of the recent political developments concerning the Israel-Palestine conflict, as well as the revised strategies that will contribute to the realization of the State of Palestine’s political vision.