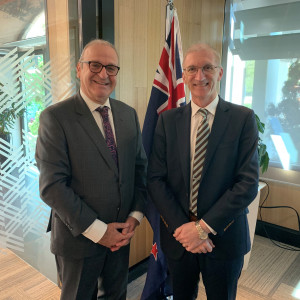 On Tuesday, 22 October, Ambassador Abdulhadi attended a briefing, which included a Q+A session, by the New Zealand Foreign Ministry’s Deputy Secretary - Australia, Europe, Middle East and Africa Group, Mr Jeff Langley, at the New Zealand High Commission in Canberra. The presentation, which focused mostly on the Middle East and North Africa, was well attended by members of the diplomatic corps, especially those from these two regions.

Mr Langley outlined New Zealand’s current focus areas and policy priorities vis-à-vis these important regions. In his response to some questions from Arab ambassadors, he re-affirmed New Zealand’s intention to maintain its support to the Palestinian refugees via UNRWA. He also made it clear that New Zealand’s position of support for the two-state solution remains firm, and that his country continues to regard Israeli settlements as a serious violation of international law, as well as an impediment to peace.