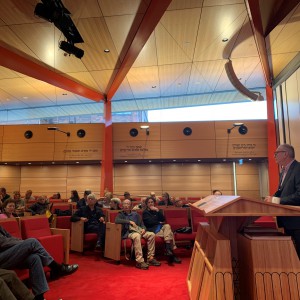 In line with one of the Palestinian Delegation’s key objectives – to deepen its engagement with civil society – Ambassador Abdulhadi has been strengthening ties with representatives of some faith communities in Australia recently. He participated in three separate functions, two of which (the annual gala dinner of the Australian Federation of Islamic Councils (AFIC) and a conference held by the World Council of Churches (WCC)) were occasions in which the work and achievements of individuals and groups in areas such as social work, charitable organisations, advancing interfaith dialogue and harmony, etc. were discussed and praised. During the AFIC dinner, the Ambassador was given the opportunity, by way of a speech, to express his appreciation to many of those present for their consistent and outspoken support for Palestinian human rights. He also spoke briefly (as he did when he met with the WCC representatives) about the current state of the conflict and how it ought to be resolved. At the Emanuel Synagogue in Sydney, the Ambassador participated in a dialogue session organised by Rabbi Jeffrey Kamins, which allowed him to engage directly with members of the Australian Jewish community. The exchanges at each event were as constructive as they were lively, since initiatives for future engagement, including the scheduling of follow-up meetings, were agreed upon.