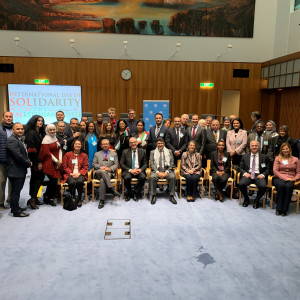 On Monday, 2 December, the United Nations Information Centre for Australia, New Zealand and the South Pacific, in partnership with the General Delegation of Palestine to Australia, New Zealand and the Pacific (GDOP), the Federal Parliamentary Friends of Palestine (PFP) and the Council of Arab Ambassadors in Australia (CAA), hosted a reception at Australian Parliament House to observe the UN International Day of Solidarity with the Palestinian People. Marking the day on which the partition resolution (181) was passed in the UN General Assembly in 1947, it is an occasion to acknowledge the dispossession and injustice that were triggered by that resolution, and that continue to this day. Importantly, it is an opportunity for the international community to show its support for an oppressed but unbroken people.