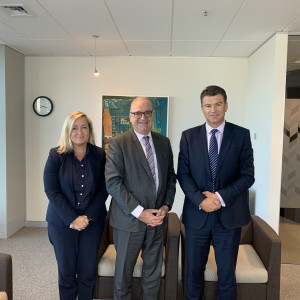 The Ambassador has discussed, during his visit to Willington, the Bi lateral and Multilateral relations between the two counties, political situation in Palestine, the establishment of a Parliamentary Friendship Group of Palestine, at the NZ Parliament.

In addition, the Ambassador conducted strategic political  consultations in Auckland and Christchurch with Advocacy groups and civil society organizations where both parties agreed to enhance coordination and cooperation between to effectively, advocating for the Palestinian rights.

During his visit, the Ambassador planned to attend the first Annual  Memorial ceremony of the victims of Christchurch attack that occurred in March last year. Unfortunately, it was cancelled due to the Government’s Coronavirus restrictions.