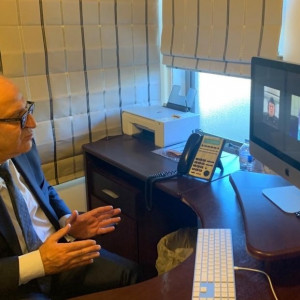 Ambassador Abdulhadi met with the Honourable Nanaia Mahuta, Minister for Foreign Affairs and Trade for Aotearoa New Zealand over Zoom on August 16.
The Ambassador discussed with the Honourable Minister the current political situation in Palestine including the continuation of Israel's settlement activities and its impact on the realization of the Two State solution and the feasibility of the establishment of a Palestinian state with East Jerusalem as its capital.
It was also noted that there are similarities between the Palestinian experience and that of the Indigenous Māori people in Aotearoa New Zealand in the face of colonialism and the struggle for Indigenous rights, and that these shared experiences may lead to common perspectives.
The Palestinian Ambassador also took the opportunity to thank the government of Aotearoa New Zealand for its consistent stance in support of Palestinian rights, in particular its regular voting in favor of Palestinian resolutions in the UN General Assembly.
The Ambassador looks forward to future engagements with the Honourable Minister and strengthening bilateral relations with Aotearoa New Zealand, as well as continuing the conversation about the vital role of Aotearoa New Zealand and the international community in securing a just and durable solution to the Israel-Palestine conflict.
2/44 Dalman Crescent
O'Malley ACT 2606
Australia
PO Box 4646
Kingston ACT 2604
Australia
+61(0)262869193
+61(0)262869405
gro.voglap@noitageleD.nainitselaP
gro.voglap@ralusnoC
Mon-Fri 9:00am to 4:00pm
Facebook
Instagram
Twitter
Newsletter