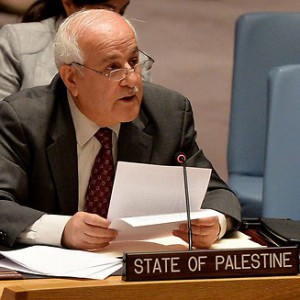 Since our last letter to you, on 9 October 2015, I regret to inform you that the situation in the Occupied State of Palestine, including East Jerusalem, continues to deteriorate at an alarming rate as a result of Israel’s crimes and violations against the Palestinian people held hostage to its occupation.  This situation warrants immediate attention by the international community, in particular the Security Council, to act to halt all violations of international law, including humanitarian and human rights law, committed by the occupying Power against the Palestinian people, as well as to provide the Palestinian people with international protection before the situation spirals further out of control.  Each day that passes, more innocent lives are lost as is any hope to reach a peaceful two-State solution in the future.

The following are just some tragic examples of the latest Palestinian casualties and human rights violations caused by the brutal raids and attacks of the occupying forces and their terrorist settlersover the past three days. The list also includes some additional violations by the Israeli occupying forces against the Palestinian population under its occupation:

The violations mentioned above should trigger immediate action by the international community, including the Security Council, to finally take measures to provide the Palestinian civilian population with immediate protection, consistent with the provisions and obligations of international humanitarian law. The Palestinian people cannot remain the exception to the responsibility to protect civilians from such atrocities and flagrant breaches of the law.

At a time when the international community is needed to step up its efforts, the Palestinian leadership expresses its dismay that the Middle East Quartet, at the behest of the occupying Power, has cancelled its planned meeting that was to take place this week in the Occupied State of Palestine and Israel.  Indeed, the cancellation of this meeting at a time that it is most needed sends a very troubling message about the readiness and ability of the international community to undertake the hard work of reviving peace prospects and the willingness to confront the continuation by Israel of its illegal and destructive policies. We appeal to the international community to rise to its responsibilities and reject the occupying Power’s obstruction of efforts block to address this critical situation with the seriousness required to de-escalate tensions, save civilian lives, and create a credible political horizon with the termination of the occupation that began in 1967 as its end goal.

This letter is in follow-up to our 557 previous letters regarding the ongoing crisis in the Occupied Palestinian Territory, including East Jerusalem, which constitutes the territory of the State of Palestine.  These letters, dated from 29 September 2000 (A/55/432-S/2000/921) to 9 October 2015 (A/ES-/10/xxx- S/2015/xxx) constitute a basic record of the crimes being committed by Israel, the occupying Power, against the Palestinian people since September 2000.  For all of these war crimes, acts of State terrorism and systematic human rights violations being committed against the Palestinian people, Israel, the occupying Power, must be held accountable and the perpetrators must be brought to justice.