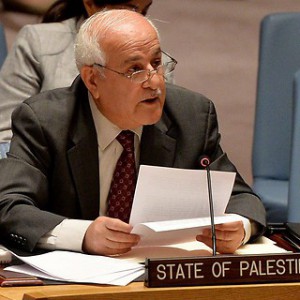 As we witness the persistent deterioration of conditions on the ground due to Israel’s other illegal actions throughout Occupied Palestine and against the Palestinian civilian population, and in the absence of peace prospects, we are compelled to again caution of the far-reaching risks of these provocations and incitement at Al-Haram Al-Sharif. We also underscore in this regard the recent statement by the United Nations Special Coordinator for the Middle East Peace Process, Mr. Nickolay Mladenov, who stressed, inter alia, that “Political and religious leaders have a responsibility to act against extremists, who undermine the rule of law.”

At the same time, we regret to inform that illegal actions overtly intended to assert Israeli control over Al-Aqsa Mosque compound also continue unabated, despite the calls and appeals against such actions. We firmly reject any provocative plans to spatially and temporally divide the compound. We reiterate the imperative of respect for the longstanding arrangements and historic status quo at Al-Haram Al-Sharif, as has been agreed to and respected by all parties for decades, and we recall the Security Council’s determination that all such measures by Israel, the occupying Power, “to alter the character and status of the Holy City of Jerusalem, and in particular the recent “basic law” on Jerusalem, are null and void and must be rescinded forthwith”.

In this context, we reiterate that all illegal Israeli actions at Al-Haram Al-Sharif and throughout the rest of Occupied East Jerusalem are in violation of the numerous relevant Security Council and General Assembly resolutions calling for a cessation of Israeli policies and measures aimed at altering the character, legal status and demography of the Occupied Palestinian Territory, including East Jerusalem, in violation of international law, particularly the Fourth Geneva Convention, which prohibits such actions. We appeal to the international community to act in word and deed to compel respect by Israel, the occupying Power, for all of its obligations under international law.

The Security Council, in accordance with its primary Charter duty for the maintenance of international peace and security, must give urgent attention to these disturbing developments and must call for an end to all provocations and incitement at Al-Haram Al-Sharif in Occupied East Jerusalem and throughout the rest of Occupied Palestine by Israel, the occupying Power, and its extremist Israeli settlers. It is clear that such actions are aimed at illegally and forcibly further entrenching Israeli control over Al-Haram Al-Sharif in Occupied East Jerusalem and must be rejected unequivocally. Moreover, it is clear that such actions risk the further destabilization of this fragile situation with unforeseen, dangerous consequences that must be averted and must instead by replaced with serious efforts to calm the situation and revive the prospects for peace on the basis of the relevant United Nations resolutions, the Arab Peace Initiative and the international consensus on the two-State solution on the basis of the pre-1967 borders.

This letter is in follow-up to our 552 previous letters regarding the ongoing crisis in the Occupied Palestinian Territory, including East Jerusalem, which constitutes the territory of the State of Palestine. These letters, dated from 29 September 2000 (A/55/432-S/2000/921) to 11 September 2015 (A/ES-/10/xxx-S/2015/xxx) constitute a basic record of the crimes being committed by Israel, the occupying Power, against the Palestinian people since September 2000. For all of these war crimes, acts of State terrorism and systematic human rights violations being committed against the Palestinian people, Israel, the occupying Power, must be held accountable and the perpetrators must be brought to justice.