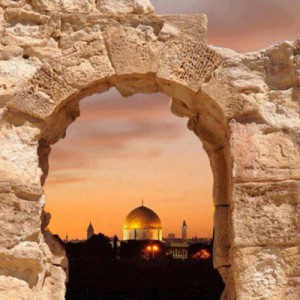 The Palestinians have slammed Prime Minister Benjamin Netanyahu's recent remarks that Jerusalem was always the capital of the Jewish people – and not of any other nation.

Speaking during a Jerusalem Day address on Sunday, the prime minister said of the city: "This is our home and here we will stay."

President Mahmoud Abbas' spokesman, Nabil Abu Rudeineh told Palestinian news agency Wafa on Monday that there would be no peace or stability in the Mideast unless the Palestinians can claim East Jerusalem as their capital.

He also said Netanyahu's remarks were a clear violation of UN resolutions, and the stances of the international community and the Arab League. Netanyahu's comments show that the next step is a diplomatic confrontation, Abu Rudeineh said, with the Palestinians turning to international bodies to thwart the Israeli government's "destructive policies."

What Netanyahu and his ministers says about the Palestinian issue will spark a fire that will be impossible to put out, Abu Rudeineh added.

Jerusalem Day was created to celebrate the putative reunification of the city 48 years ago. During his address to mark the day on Sunday, Netanyahu also stressed that Israel ensures that Jerusalem will be an open and tolerant city. "Only under Israeli rule is the freedom of worship in Jerusalem guaranteed for all religions," he said. "Believers pray at their holy sites, not despite our control over the city but because of it."

He described Jerusalem as a "touchstone that puts us to the test: To what extent are we willing to hold onto it and defend it?"

Netanyahu vowed that Israel will never come to terms with terror and will hunt down its proponents. "We will fight incitement, which stems from denial of our attachment to Jerusalem and our heritage."

"Who opposes our presence in Jerusalem?" the prime minister asked. "Those who refuse to accept out right to live as a sovereign nation in our country. They regard us as a foreign weed that needs to be pulled out of this ground."

In a more conciliatory speech, meanwhile, President Reuven Rivlin said that, while Jerusalem for him is both "Zion and Zionism," it doesn't belong only to its history.

"It belongs first and foremost to its people, to all its residents – secular, religious and Haredi; Arabs and Jews," Rivlin said. "In united Jerusalem there is a west and an east. It has no step-children."

"We must be honest with ourselves when we look at the massive gulf between the west of the city and the east," the president urged his audience. "We may have united the city, but we have barely begun the task of bringing about its economic and social unity.

"While western Jerusalem is achieving impressive progress and development, in the east we find neglect and despair."