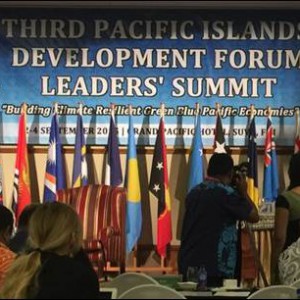 The Ambassador of the General Delegation of Palestine to Australia, New Zealand and the Pacific, Mr. Izzat Abdulhadi, made a successful visit to Fiji through the participation in the Pacific Countries Development Forum. Primarily convened to discuss the challenge of climate change that is disproportionately affecting Pacific nations. The forum was attended by a number of heads of state from Pacific countries. The Ambassador conducted meetings with most of the heads of the delegations of the participating countries, in which he discussed with them the issue of recognising the State of Palestine. The most productive of these meetings was with the Fijian Minister for Foreign Affairs, Inoke Kubuabola, who expressed the willingness of the Fijian government to recognise the State of Palestine pending necessary consultations. This is considered an important development in Palestinian-Fijian relations. Further discussions that took place at this forum focused on the potential for professional and developmental coordination between Palestine and a number of Pacific countries. Further research into advancing such relations is being conducted by the General Delegation of Palestine.