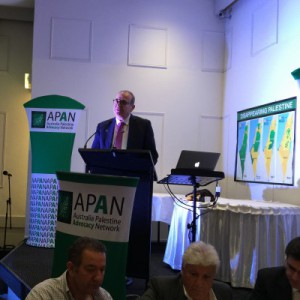 The stabbings and the stone-throwings are the saddest acts of human despair, committed by those who, in the middle of feeling that their hope for a better future is lost, are attempting to regain a sense of power and control.

When we look at Israel’s response to these acts of despair, what do we see?

No, we see none of these things. Instead, we see Israel increasing its violence with a shoot to kill policy, issuing Jewish citizens with guns, checkpoints and home demolitions. In the middle of all of this, settlements are increasing on a daily basis. And we see the protest that a state that uses its overwhelming military might to maintain an occupation over a people in their own land, is the innocent victim. A person could be excused for thinking that we live in times of despair, and act accordingly.

Yet, my message to you tonight is that Yes, these are difficult times. They might feel like the worst of times; a time of nothingness and Yes, times of despair.

Yet this is a time when everything is before us. It is a time for constancy and it’s the time for action.

As Palestine’s stature as a state grows in the international arena; as more countries recognise AND accord Palestine and our people, our natural rights;

As we exercise those rights in the international arena, and slowly, slowly, but very steadily bring justice closer and closer, Israel’s response is to use increasingly repressive measures and to try to deny reality.

At every turn, Israel tries to deny the personhood of our people, the exercise of our rights, and the statehood of Palestine. Trying at every turn to deny reality, it is Israel that shows it’s increasingly desperate.

This week’s desperation reached new heights with Netanyahu’s statement that Palestinians were responsible for the Holocaust.

Politics doesn’t get much more ridiculous than this, and yet, there it was.

We, Palestinians, a people living under Israel’s occupation, were responsible for the Holocaust. I think Netanyahu’s office needs a fact-checker, and fast.

Israel is facing a Europe that, piece by piece, is forcing responsibility for settlements.

Europe is upholding and implementing its third party obligations under international law, by targeting the illegality of settlements.

On the other side of the Atlantic, Israel is facing an America that in small moves, is widening the gap between itself and Israel’s actions. And internationally, we see Palestine’s sovereignty strengthening, as we pursue, and as we achieve our place in the international arena; Our place at the table.

There’s an old saying and it’s a cliché, but let me share it with you: Rome wasn’t built in a day. If that one doesn’t speak to your heart, let me try another: From tiny acorns to mighty oaks grow.

Yes, these are difficult times. Progress is slow and it can feel like there’s little that’s changing.

And we are under occupation, but we are not victims. We will have our freedoms – in full. We will have full sovereignty over our own lives. We are the people of our state.

Through all of Palestine’s history, we its people, have worked together towards this end.

And now, we use our rights in the international arena and these rights are slowly achieving the goal which Israel fears the most and resists the most; Palestinian sovereignty and the full freedom of our people in our own lives, on our own land, in our own state.

In these difficult times, never give in to sadness. Never lose hope or constancy, and never despair, and never, not ever lose sight that full Palestinian sovereignty and our freedom, is the goal and it will be the end.