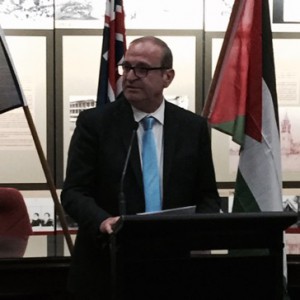 Ambassador of the State of Palestine H.E. Izzat Abdulhadi celebrated Independence Day with the Palestinian People in Sydney on the 11th of November 2015, in an event organized by the Council of Australian Palestinians (CAP) which, commemorated the late martyred President Yasser Arafat.

The event was attended by a large number of representatives from the Arab and International diplomatic corps in Canberra as well as members of Parliament and representatives of civil society including members of the Palestinian and Arab community in Australia.

During the event the Ambassador of the state of Palestine H.E Mr. Izzat Abdulhadi delivered an important speech in which he highlighted the significant achievements for the liberation of Palestine, the wise vision of the Palestinian leadership and its international strategy for the realization of a Two-State solution.

He also referred to the dire current situation and Israel's direct responsibility for the current wave of violence as a result of the long occupation and continuing violations of Palestinian religious rights and freedoms. The Palestinian Ambassador also praised the achievements of the late martyr Yasser Arafat in entrenching the Palestinian sense of identity and the right to self-determination of the Palestinian people.

Labor Opposition leader Luke Foley MP delivered an important speech in which he praised the Palestinian people's struggle and everlasting sacrifice for freedom and independence. He also stressed once again the historic decision taken at the Labor Party conference on the possible recognition of a Palestinian State in the event of succeeding in the upcoming parliamentary elections.

Also speaking at the ceremony, Former Australian Foreign Minister and Premier of NSW Sen. Bob Carr denounced Israel’s continuous settlement policies and considered them the main obstacle to a two-State solution, acknowledging they are illegal under international law. He also noted that continued Israeli settlement would lead to a bi-national State.

Mr. Albert Jubbian, Chairman of the Council of Australian Palestinians, also gave a speech in which he highlighted Israel's continued violations of human rights, its blockade of the Gaza strip, illegal settlement expansion and ignoring the issue of return for Palestinian refugees.