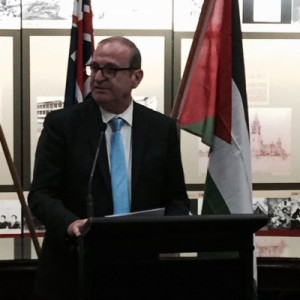 Celebration of Palestine’s Declaration of Independence

Friends, Distinguished Guests, Ladies and Gentlemen, thank you for being here tonight.

Thank you for celebrating Palestinian Independence.

I’d like to extend my appreciation to the Council of Australian Palestinians for tonight’s event and my warmest greetings to each of you, as we celebrate together.

On November 15, 1988, Abu Ammar, the late Yasser Arafat, Chairman of the PLO, proclaimed the Independent State of Palestine.

Today, November 15, is the day Arafat died in 2004.  I pay tribute to him, his work and his life. He spent his life struggling for Palestinian people and at a very high cost to himself personally.

In 1988, Arafat was in Algiers because it was impossible for him to return home. He, like many others, wandered and waited.

The Declaration of Independence, written by Mahmoud Darwish, is the voice of our desire as Palestinian people, for our home; our own state.

We didn’t want emotions to make us blind to what needed to be real: A sovereign state, a secure state and a democratic state, where we could live with the rights and the responsibilities of citizens. We needed freedom, stability and prosperity for all Palestinians.

I was 31 at the time of the Declaration of Independence, and the state was then, just songs and flags.

When the Oslo Accords were signed in 1993, I was 36 years old, and many Palestinians who had been forced out, were allowed to return home.

They came back with all of their experience and knowledge and used their skills to build the state. The purpose was to build the state from the ground up, through creating the structures of the state; the stable and reliable institutions and the services a state provides for all its citizens.

It was less romantic than songs and flags, however we’ve achieved it.

One hundred and fourty countries recognise Palestine as a state. Palestine holds observer non-member state status in the United Nations. In the past two years, acting on, and strengthening Palestinian sovereignty, we’ve joined 20 international treaties and conventions including the Geneva Conventions and the Rome Statute, giving access to the International Criminal Court. Palestine has submitted it’s first file on Israel’s 2014 war on the people of Gaza and has asked for retrospective action.

How much does it take?

In October, Netanyahu – and I use his own words’ - said to his MP’s that Israel needed to control all of the territory for the foreseeable future. On Monday, 2, 200 more settlements units were approved.

It’s no surprise that some young Palestinians have lost hope and have despaired.

But just as we Palestinians committed to our state in 1988, we commit to it now and there are no more meaningless games of negotiations.

We’re asking the world to honour peace, to give us justice, and we’re asking for this with the rights of a state.

This week, Jordan, representing the Arab League, submitted notice to the Security Council that it will request a special system of protection for Palestine, including East Jerusalem; our Capital.

If this doesn’t succeed, the General Assembly will be asked to act under the Uniting for Peace provision (Resolution 377).

Israel’s violence and tyranny is a tyranny of fear. It’s not a fear for security. This is utterly false.

Israel’s fear is the fear of losing what they’ve looted and plundered from Palestine and Palestinian people: Our water, our resources, our right to our own economy, and most of all, our land.

Despite everything Israel does to try maintain control, the occupation will end. And while we wait for the occupation to end, we’ll keep building our state.

Australia’s commitment to Palestine has grown, both from people like yourself, and from the Federal Government.

All of us would like to see more political commitment from the Australian government.

But we are seeing increased visits of MPs to Palestine. Official agreements are being signed between the Australian government and the PA. Last month, the General Director of the Ministry of Agriculture was hosted by DFAT in Canberra for 3 days. The General Director was here in Australia to review agricultural agreements with Palestine and to sign new agreements. These agreements operate through the Australian NGO cooperation framework of AMENCA Three. Despite big falls in Australian aid funding to many parts of the world, funding to Palestine continues.

This year’s Labor Party resolution on Palestine implicitly recognises the Palestinian state. The resolution says that if there’s no progress in peace, a future Labor government will discuss recognition of Palestine as a state.

We’re there and we’re just waiting for Australia to catch up.

It’s in Australia’s strategic interest to join the 140 countries that already recognise Palestine as a state.

This morning in Canberra, I briefed the Joint Standing Committee for Foreign Affairs, Defence and Trade on Palestine, and this was the focus on the briefing.

When we consider how much has changed since 1988, I’d like to recognise – to warmly recognise - the stronger and stronger support from Australians like yourselves, some whom are Palestinian and who’ve lived the injustice, and others of you who know injustice when you see it.

Your work and your voice is growing stronger and stronger and the strength of your work is reflected in opinion polls showing that more than 66% of Australian’s support recognition of Palestine as a state.

We have our flag, and it’s imprinted on our hearts, and we have the song of our freedom, Fida’i.

Tonight here together, we celebrate the Declaration of Independence made in 1988 and now in 2015, we recognise all of the struggle, all of the sacrifice, and all that has been achieved since 1988.

Israel, if it doesn’t change, will be on the wrong side of history.

Thank you Ladies and Gentlemen.