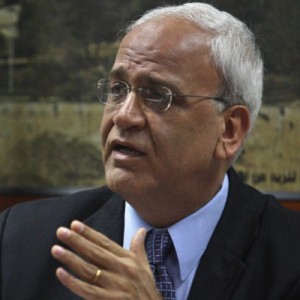 The Secretary-General of the PLO, Dr. Saeb Erekat, expressed his appreciation for the Swedish Minister of Foreign Affairs, Margo Wallstrom’s remarks Wednesday regarding clarification on the escalated violence and extremism in the Middle East. Dr. Erekat stressed that these statements serve as a path for peace and the restoration of confidence in the international community for their silence of continued Israeli violation of international law endured for decades by Palestinians.
On being a leading human rights defender, Dr. Erekat stated, “Sweden is a nation committed to international law and was a one of the first EU countries to recognize our people’s right to self-determination, and whose principled stance is based on international human rights – legally, ethically, and realistically.  When Sweden made this decision, it was part of a comprehensive framework, not a piecemeal result.”
Dr. Erekat further addressed Sweden’s legitimate concerns regarding youth joining terrorist organizations such as Daesh.  “We reject any attempts to exploit the Palestinian cause to serve the interests of any terrorist organizations, and I must reiterate and warn against the continued attempts to shift the Israeli occupation of Palestine from a political conflict into a religious conflict, which only feeds into Israeli hatred, incitement, racism, and support for the organized settler-terrorism complex.”
“To remedy the root cause of despair and achieve a secure and stable region is to put an end to the Israeli occupation and establish a sovereign State of Palestine on the 1967 borders with Jerusalem as its capital.”
In his closing statements, Dr. Erekat called on countries worldwide to follow Sweden’s example and stop applying double standards and reach a practical solution to end the military occupation of Palestine.
2/44 Dalman Crescent
O'Malley ACT 2606
Australia
PO Box 4646
Kingston ACT 2604
Australia
Send us a message
+61(0)262869193
+61(0)262869405
gro.voglap@noitageleD.nainitselaP
moc.dnopgib@noitageleD.nainitselaP
Mon-Fri 9:00am to 4:00pm