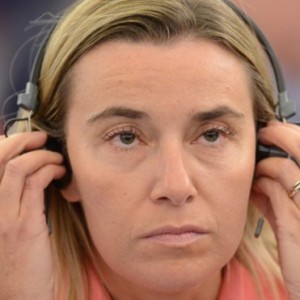 Foreign ministers from 16 EU countries – including the UK – have signed a letter to the EU’s foreign policy head, Federica Mogherini, requesting she expedite moves to ensure the clear labelling of goods produced in illegal Israeli settlements and sold in Europe.

The letter, written earlier this week – and leaked to the Israeli newspaper Haaretz on Thursday, comes amid mounting pressure from ministers in a number of European countries to advance punitive policies targeting Israel’s settlements on occupied Palestinian land.

That pressure has been mounting since the collapse last year of the US-sponsored peace talks between Israel and the Palestinian Authority, and amid concern that a new coalition government being assembled by the Israeli prime minister, Binyamin Netanyahu, will have no interest in advancing a two-state solution.

Among the signatories of the letter are France, Britain, Spain, Italy, Belgium, Sweden, Malta, Austria, Ireland, Portugal, Slovenia, Hungary, Finland, Denmark, The Netherlands and Luxembourg – with only Germany’s foreign minister among the five biggest European states not endorsing it.

Although the issue of mandated labelling Europe-wide has been on the agenda for some time as a response to Israel’s continued settlement building, the letter appears to mark a sharp increase in pressure for action to be brought to a head.

The text was apparently drafted by the Belgian foreign minister, Didier Reynders, in line with his own country’s guidelines which, since 2014, have required chain stores to label agricultural products from West Bank settlements, East Jerusalem and the Golan Heights.

“We would like to draw your attention to the letter dated 13th April 2013 sent to your predecessor on EU wide guidelines on the labelling of settlement produce/products,” the letter states after welcoming the renewed engagement of the EU in the Israel-Palestine issue under Mogherini.

“We remain of the view that this is an important step in the full implementation of EU longstanding policy, in relation to the preservation of the two-state solution.”

“[The] continued expansion of Israeli illegal settlements in the Occupied Palestinian Territory, and other territories occupied by Israel since 1967, threatens the prospect of a just and final peace agreement,” the letter reads.

“European consumers must indeed have confidence in knowing the origin of goods they are purchasing,” the ministers write. “Green Line Israel and Palestinian producers will benefit from this.”

The issue of labelling was highlighted among a series of recommendations in a hard-hitting report prepared for policymakers, prepared by the EU heads of mission in Jerusalem, which was leaked to the Guardian earlier this year.

Other recommendations put forward then included potential new restrictions against “known violent settlers and those calling for acts of violence as regards immigration regulations in EU member states” as well as efforts to raise awareness among European businesses about the risks of working with settlements, and the advancement of voluntary guidelines for tourism operators to prevent support for settlement business.

A number of EU countries have been trying to push forward the issue of food labelling for several years – an initiative that was put on hold 2013 at the request of US secretary of state, John Kerry, in 2013, at a time when he was trying to restart Israeli-Palestinian peace talks.

But since the breakdown of those talks a year ago – and comments made by Netanyahu during the recent Israeli elections in which he said he would not allow a Palestinian state to be established (remarks he later attempted to retract), the mood in both the EU and the US has hardened towards Israel, with France reportedly working on drafting a new UN security council resolution on Palestinian statehood.