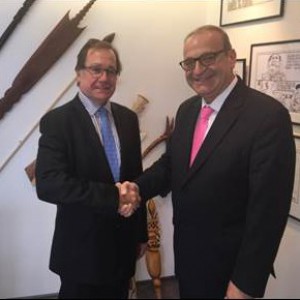 The Minister for Foreign Affairs in New Zealand, The Hon. Murray McCully visited Palestine on Thursday 4 June where he met with the Foreign Minister of the State of Palestine, H.E. Dr Riad Malki.

Mr. McCully also met with the President of the State of Palestine Mr. Mahmoud Abbas, and the Prime Minister Dr. Rami Al Hamdallah.

During the meetings, the New Zealand Minister and Palestinian representatives undertook deep and extensive discussions on the latest developments in the Israeli-Palestinian conflict and the current attempts to revive the frozen peace process.

The visiting Minister explained the interest of New Zealand, as a current member of the U.N. Security Council, in playing an active role in the Security Council to resolve this protracted conflict. The Minister conveyed his confidence that an opportunity exists to resume the negotiations between Israel and Palestine, through the active involvement of all stakeholders and with strong facilitation and leadership from the Security Council.

The two foreign ministers discussed the French Security Council’s initiative and the position of the various parties towards its approach and content. In addition, the New Zealand Minister expressed his government’s interest in submitting another proposal to the Security Council if the French resolution were to be defeated.

Both sides agreed on the urgency of engaging the Security Council to discuss the issue within the coming few months.

The Ambassador of Palestine to Australia, New Zealand and the Pacific, H.E. Izzat Abdulhadi, welcomed the visiting Minister in Ramallah and participated in the various meetings that the Minister undertook.