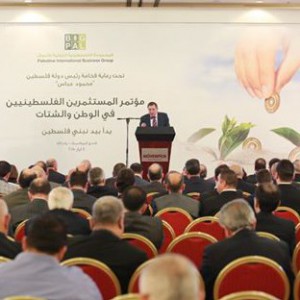 The Palestine Investors' Conference in the Homeland and the Diaspora took place in Ramallah May 4, 2015 with the aim to promote investment in the state of Palestine by Palestinians living in the diaspora. The conference that was organizes by the Palestine International Business Forum, was attended by dozens of Palestinian businessmen living both in the occupied territories and abroad.
According to estimates by The Palestinian Central Bureau of Statistics (PCBS) the Palestinian Diaspora numbers more than 5 million. More than four million of those are living in other Arab nations, while there are approximately 600,000 in the rest of the world.

According to a 2015 report by the Palestine Economic Policy Research Institute: "Remittance inflows to Palestine are an imperative source of foreign exchange. In 2013, remittance inflows amounted to US $2.3 billion, making Palestine the seventh-largest recipient of remittances relative to GDP."

Addressing the conference, H.E. President Mahmoud Abbas called on Palestinians living abroad to invest in Palestine and contribute to the Palestinian economy.

President Abbas told attendees: "We salute this initiative and invite you to take part in more economic meetings, projects and initiatives. These alone will build the nation."
He stressed the need for development projects as well as an industrial economy, "so that we can build our economy and give jobs to the Palestinian youth."
The president said that as Palestinians were still laying the foundations of their economy, they "must seek the most beneficial and most feasible projects to adopt."
He said: "Our aim now is that Palestinians, wherever they are, entrench themselves and their children in this nation, and that they then plant a tree, for this is how nations are built."