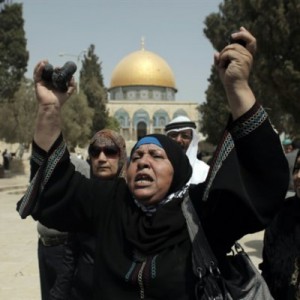 Meanwhile, Presidential spokesperson, Nabil Abu Rudeineh, also denounced Israel’s Sunday assault against the mosque and worshipers. He said that East Jerusalem and all Muslim and Christian holy sites are a red line that cannot be bypassed, stressing that, ‘we’ will not stand idly by before these assaults.

The presidential spokesperson reported that Abbas is making intensified calls with all Arab, regional, and international sides, particularly Jordan which is responsible for Jerusalem's holy sites in line with a 1994 peace treaty with Israel, in order to put a stop to ‘these vicious attacks’ committed against the mosque.

Clashes erupted on Sunday morning after Israeli police allowed the entry of Israeli settlers into al-Aqsa Mosque compound in Jerusalem, while attacking Palestinians and imposing restrictions on their entry.

Police used teargas and stun grenades against the worshipers and chased many of them throughout the mosque, causing many cases of suffocation due to teargas inhalation.