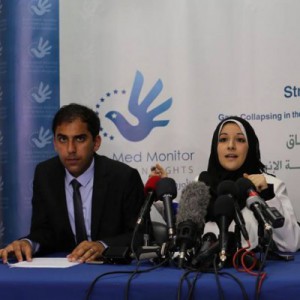 It has been nine months since Israel agreed to a ceasefire that ended its third and most massive military offensive against the 1.8 million residents of the Gaza Strip. However, despite promises by Israel to loosen its nine-year blockade, by Egypt to facilitate further negotiations and by the international community to fund the massive reconstruction needed, none of those promises have been kept.

Today, the Israeli army continues to regularly shoot at fishermen, or confiscate their boats, when they merely are trying to make a living. In April alone, 15 shooting incidents, including one that ended in injury and property damage, were documented.

Likewise, although the estimated cost of relief, recovery and reconstruction due to last summer’s war is $4 billion, and international donors pledged $3.5 billion for Gaza’s reconstruction, only $954 million had been disbursed as of early April.

It’s not surprising, then, that UNRWA has suspended its cash-assistance program for repairs and rent due to lack of funds, and that the Israeli organization Gisha reports that of the 5 million tons of construction materials required, only 9 percent of that total has actually entered Gaza.

To add insult to injury, Egypt has joined Israel as Gaza’s jailers. In its 2014 annual statistics, the Gaza Interior Ministry reported that Rafah crossing was closed for 66 percent of the time. That trend has continued. On April 19, the ministry noted that the Rafah crossing had been closed for 100 days since the beginning of 2015, marking the longest closure since 2009.

The consequences are predictable. Unemployment has soared to 43 percent, and according to the International Monetary Fund, the Strip’s gross domestic product plunged 24 percent in the third quarter of 2014. This, is an economy that already was on life support.

With the exception of solidarity activists such as those aboard the trawler Marianne, now steaming its way toward Gaza from Sweden, most of the world’s attention has shifted away to other pressing issues. However, Gaza remains a crisis in the making that will blow up into another war, or at the very least cause large-scale and socially immoral suffering, if the international community does not re-shoulder its responsibilities.

The Euro-Mediterranean Human Rights Monitor therefore urgently calls on the international community to:
1.Bring all available pressures to bear on the Israeli government to end the blockade of Gaza.
2.Call on the Israeli government to end the targeting of innocent fishermen, farmers and other citizens, a practice in violation of the 1949 Geneva Convention.
3.Prevail upon the Egyptian government, using foreign aid as a lever, to open the Rafah crossing, without any restrictions.
4.Investigate and hold the Israeli government accountable when it is charged with war crimes and ongoing violations of human rights. No barriers should be placed that hinder the ability of Palestinians or others to seek relief from third parties such as the International Criminal Court.
5.Support the Palestinian call for a commercial seaport in Gaza that guarantees the free import and export of goods and private international travel.