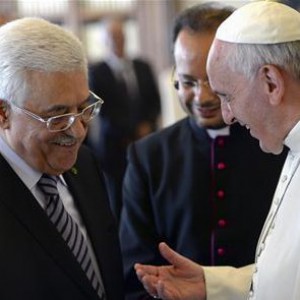 The Holy See has had diplomatic relations with the Palestinians since 1994, and has referred to the “State of Palestine” in official documents since the United Nations admitted a Palestinian nonmember observer state in 2012.

The agreement announced Wednesday, which a joint Vatican-Palestinian statement said will be signed in the near future, is the result of talks that began in 2000.

The treaty’s text wasn’t released, but Msgr. Antoine Camilleri, the Holy See’s chief negotiator with the Palestinians, told the Vatican-run newspaper the accord covers the activities and legal status of the Catholic Church in the Palestinian Territories.

A “very elaborate and detailed” section deals with “religious freedom and freedom of conscience,” Msgr. Camilleri said. Other sections deal with property and tax questions, as well as the scope of Catholic media and charitable activities. Msgr. Camilleri voiced hope other Muslim-majority countries would follow the Palestinian example of recognizing the religious freedom of Christians and other minorities.

He said he also hoped the deal would help, “if only in an indirect way,” to promote the recognition of Palestinian statehood and the realization of a two-state solution to the Israeli-Palestinian conflict.