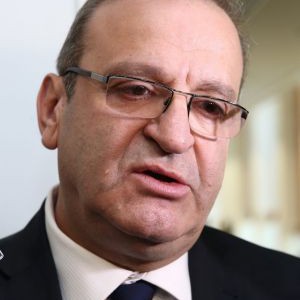 Foreign Minister Julie Bishop has quickly dismissed a pair of contentious suggestions on Middle East relations from Tony Abbott, who called for the Australian embassy in Israel to be relocated to Jerusalem and for a cut to development aid for the Palestinian Authority because of their financial support for "terrorists and their families".

The government's rejection of the former prime minister's comments was swiftly joined by an impassioned rebuke from the head of the Palestinian delegation in Australia, Izzat Abdulhadi, who called them "unfounded, unhelpful" and warned of "severe" consequences for Australia in the form of sanctions and condemnation from Muslim countries.

Ms Bishop said Australia "does not have any plans to move the Australian embassy from Tel Aviv to Jerusalem" - a move that would echo the plans of United States President-elect Donald Trump, whose incoming administration sees the relocation of their embassy as a "very big priority".

This is despite longstanding international convention and potentially destabilising consequences. While Israel considers Jerusalem to be its "eternal" and "indivisible" capital, other countries maintain embassies in Tel Aviv because the Israeli annexation of East Jerusalem in 1967 is regarded as illegitimate.

Writing for The Spectator Australia, Mr Abbott said an Australian demonstration of "unswerving support for Israel, as the Middle East's only liberal, pluralist democracy, might be to join any move by the Trump administration to move its embassy to Jerusalem".

But Ms Bishop stood by the aid program in the region, saying it has "robust risk management and due diligence assessment processes" that also apply to partner agencies and governments.

She also said the government had a "zero tolerance policy" for fraud and corruption, pointing to the suspension and review of funding following 2016 allegations that a Palestinian World Vision employee was redirecting millions of dollars to terrorist group Hamas.

In a statement to Fairfax Media, Mr Abdulhadi said an embassy relocation would run contrary to government policy on the status of Jerusalem and international law and would "severely damage the prospects for a two-state solution to the conflict - the solution that is supported by Palestine, Australia, and the international community".

"Such a move would have severe negative political and economic consequences for Australia. The status of Jerusalem is an extremely important issue to countries with Muslim populations and moving the Australian embassy in Israel from Tel Aviv to Jerusalem would be met with widespread condemnation and potentially sanctions against Australia from these countries," he said.

"International law deems East Jerusalem as occupied Palestinian territories—a position that is held by the overwhelming majority of the international community."

Acting Labor leader Chris Bowen said his party's policy to leave the embassy in place had not changed and that development assistance to the Palestinian territories should be "transparent and accountable". He said this funding was "vital to the work of countering extremism and promoting peace".

The former prime minister's comments come shortly after a trip to the region for the Australia-Israel-UK Leadership Dialogue and a damning United Nations Security Council resolution labelling Israeli settlements in occupied Palestinian territory illegal. The resolution was co-sponsored by New Zealand's conservative government and permitted by the US, Israel's historical ally.

The gesture by the outgoing Obama administration has enraged and energised conservatives, including Mr Trump, who described it as "extremely unfair", and Prime Minister Malcolm Turnbull, who called it "one-sided" and "deeply unsettling".

As a significant ancient site for Christianity, Judaism and Islam, Jerusalem has long been at the centre of religious and political tensions in the Middle East and further division over its possession would represent an obstacle to peace and Palestinian statehood.

Palestinians also lay claim to Jerusalem as the capital of a future state. The US embassy's relocation - a cause celebre for Israel's fiercest American backers - would likely trigger outrage across the Muslim would.

In 1995, the US Congress voted to move the embassy but successive presidents have delayed the relocation every six months using a waiver provision, citing security concerns.

Mr Abbott is not the first Australian politician to call for an embassy move. Last year, Liberal senator James Paterson argued that "Jerusalem is Israel's capital and we should respect that by putting our embassy where they choose to have their capital".

The Department of Foreign Affairs and Trade specifies Tel Aviv as Israel's capital and prominent counter-terrorism researcher, Professor Greg Barton, said relocation "wouldn't be a wise move" and argued no other nation has done it so far.

Following Mr Trump's example "would deal us out of playing any role as a serious middle power in negotiating," Professor Barton told ABC. "The future of Israel for Jewish Israelis and Palestinian Israelis and for people living in the Gaza Strip and the West Bank depends on trust and negotiation."

The Abbott government was actively supportive of Israel in related debates. In November 2013, Australia broke with 158 countries and withdrew support for a UN order to stop settlement construction. In June 2014, shortly after the last round of peace talks broke down, the government refused to label East Jerusalem "occupied".

Following an invitation from Ms Bishop, Israeli Prime Minister Benjamin Netanyahu is set to visit Australia in 2017, the first leader of his country to do so.