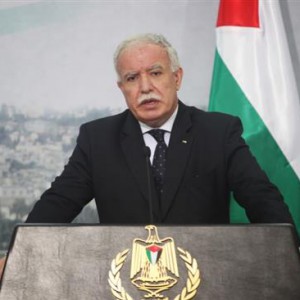 Palestinian Foreign Minister Riyad al-Maliki: "We'll have a vigorous and immediate follow up for the implementation of the Paris Conference outputs." Dr al-Maliki said that "The Paris Peace Conference on the Middle East, which concluded its work Sunday, left us with a document containing three components, each of which needs a special approach in follow-up."

Dr al-Maliki said in a statement on Monday that this is making the coming period a stage to work on the translation of the statement elements and how to use them beyond the borders of the Palestinian cause, and build on them in the development of new mechanisms of action during the current year 2017. He added that the first element is linked to the two-state solution principle, as it was an international agreed consensus position, which means that it is necessary to take practical steps to apply this principle, Dr al-Maliki added that the statement explained these steps. The Foreign Ministry said he will follow up the implementation of these steps in coordination with the French Foreign Ministry, and how to develop practical mechanisms to achieve them.

He pointed out that the second element is linked to practical steps to enhance the structure of the state of Palestine, and provide a positive climate for the complexity of relationships outside the formal framework within the institutions of civil society, and in the extraordinary situation presented by the European Union for both Palestine and Israel in the event to taking advantage of the opportunity to achieve peace.

On the third element, Dr al-Maliki said: this element is linked to follow-up mechanisms associated with the conference, which in turn is consistent with the Palestinian aspirations in its general framework, which requires details in the statement’s text, which called on both sides (to confirm their commitment to the two-state solution and distance themselves from the calls rejecting this solution), especially since there are many voices within the Israeli government that openly reject the two-state solution, which puts the entire Israeli government's structure in front of the commitment to this item specifically.