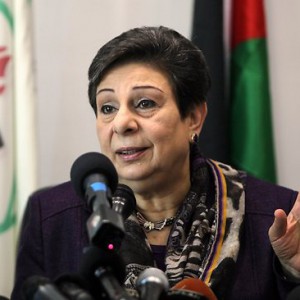 We extend our gratitude and appreciation to the French government for its initiative to organize an international peace conference of foreign ministers and diplomats in Paris on January 15, and for putting the Palestinian issue back on the global agenda; we also acknowledge the Participants for their commitment to international law and to the two-state solution.

Nevertheless, it is evident that Israel and its proxies managed to water down the Joint Declaration and weaken its effectiveness.  The Declaration omitted any reference to the creation of the Palestinian state on 1967 borders and restricted that “to ending the occupation that began in 1967,” which does not necessarily conflate with the boundaries of the state.  Such an ambiguity enables Israel to circumvent UN resolutions and to violate the basic requirements for peace.  We cannot accept such backsliding as it is inconsistent with the Participants’ intentions “to reaffirm their support for a just, lasting and comprehensive resolution of the Israeli-Palestinian conflict.”  The Palestinian acceptance of 1967 borders (22% of historical Palestine) was an extremely painful concession, and it should not be subject to negotiations or modification.

The Declaration further creates a false symmetry between the belligerent occupier and a vulnerable nation under occupation by allocating equal blame to “both sides.”  Israel as the powerful party which is responsible for violations of international law and human rights must be held to account, and its violations must be curbed.  By repeatedly blaming the Palestinians for “incitement” and using the label of “all acts of violence and terror,” the Declaration creates a misleading equivalence and a stereotypical smear.

It is unfortunate that the relevant UN Security Council resolutions are “to be recalled” rather than forming the basis for resolving all permanent status issues.  As a coherent body of law, these resolutions must be the essence of the operative portions of the Declaration and the search for a solution.   In addition, UNSC resolution 2334 should be a firm foundation on which to base the quest for peace, and must not be equated with the July 1, 2016 recommendations of the Quartet which were not accepted by the Palestinian people nor with the U.S. Secretary of State’s Principles of December 28, 2016 which echo Israeli priorities and diction.

In addition, the problem does not lie in the lack of incentives for the parties or in normalization between their civil societies; rather the real impediment has been Israel’s impunity and its refusal to comply with international law and with the will of the international community.  All the generous rewards, positive inducements and legal protection it has received from Europe and the U.S. have not brought it to compliance; what is needed is real accountability for Israel.  The Participants would do better to hold Israel to account and to send a real message that there is a price to be paid for its violations rather than dangling further rewards down the line.

Absent effective follow-up mechanisms with the responsibilities of arbitration, monitoring and evaluation, and concrete engagement, the outcome of the Conference becomes just another verbal exercise.  The one-year framework within which to meet again mainly provides Israel with ample time to continue to create its unilateral facts on the ground and to destroy the declared objectives of this exercise which is the two-state solution.  Again, “negotiations” are not an objective but a means to an end, and it would be wise to draw the proper conclusions from the lessons learned after twenty-six years of bilateral negotiations that have merely entrenched the occupation and placed the two-state solution in serious jeopardy.

The Palestinian side has repeatedly declared its commitment to a peaceful settlement defined as the two-state solution on the 1967 borders with East Jerusalem as the capital of the Palestinian state, and all permanent status issues being resolved on the basis of international law and international humanitarian law.  We have cooperated with the international community to bring that about and to fulfill our obligations as per the agreements.  Unfortunately, Israel has willfully reneged on its commitments, violated the agreements and repeatedly breached international law.  Simply stated, these are the real issues, and they must not be circumvented.

We regret the unfortunate stance of the British and Australian governments, as well as the UK going so far as to prevent the EU Foreign Affairs Council from adopting the Declaration.  Instead of rectifying its historical responsibility for the tragedy of Palestine, the UK is compounding its culpability by undermining initiatives, however modest, that try to bring about a two-state solution.  This is further cause for alarm given the rise of populism in the U.S. and in Europe and the strident declarations concerning the annexation of Jerusalem and illegal settlements in Palestine.  Such common language between the new governments in the U.S. and the UK does not bode well for peace at all and undermines the stability and security of an already volatile region.

If those who claim to be committed to the two-state solution are serious, then their first test is to recognize the State of Palestine on the 1967 boundaries with East Jerusalem as its capital.  These are the attributes of even-handedness and of an active support of a just peace.