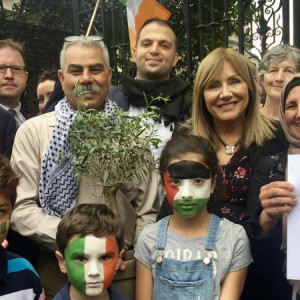 On behalf of the Palestinian people and the Palestinian leadership, I extend our sincere appreciation to the Irish Seanad for standing tall for the principle of justice by approving this historic motion banning trade with the illegal Israeli colonial settlements in occupied Palestine. This courageous step builds on the historic ties between Ireland and Palestine, and it shows the way forward for the rest of the European Union.

Today the Irish Seanad has sent a clear message to the international community and particularly to the rest of the European Union: the mere talking about the two-state solution is not enough without taking concrete measures. Those trading with Israeli settlements are complicit in the systematic denial of the Palestinian right to self-determination. If some countries within the EU are willing to continue encouraging Israel’s culture of impunity, it is time for individual member states to take legitimate actions like the one approved by the Seanad.

I would like to make use of this occasion to thank everyone who was involved in the approval of this law, from political parties to Palestinian and Irish civil society, and particularly to Senator Frances Black for her courage to introduce this motion that advances the cause of justice in Palestine.