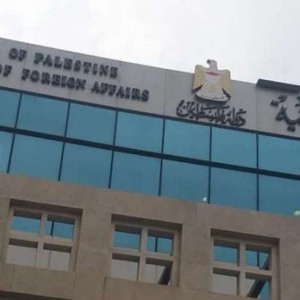 The Ministry of Foreign Affairs and Expatriates strongly condemns the incitement campaigns that is adopted by the Israeli right wing against the Palestinian people and Palestinian leadership, headed by President Mahmoud Abbas. The Ministry believe these campaigns are a continuation of the previous campaigns of defamation that the Israeli government used to practice against the Palestinians, to twist and obliterate the reality of the conflict, and to conceal the Israeli violations of breaching international law; whether these violations are related to the continued expansion of settlements or the various daily crimes committed against the Palestinian people, in an attempt to mislead the public opinion and international leaders through marketing a series of false positions that are simply inaccurate and delusional.

The historical, political, diplomatic and legal facts confirmed by the Palestinian president, Mahmoud Abbas, at the opening of the Central Council, had a powerful impact on the Israeli officials which led them to participate in this incitement campaign. The president’s speech expressed the hopes and aspirations of our people, the magnitude of the injustice caused by the occupation and its brutal practices and ongoing crimes, and the clear American bias towards occupation and settlement. These facts, which stick to the Palestinian peace values and culture, which is clearly committed to holding on to a peaceful political solution to the conflict through serious negotiations, in accordance with international resolutions ,international law and the Arab Peace Initiative, or if its related to the political diplomatic movement in the international arena within the framework of the United Nations and its organizations, institutions and specialized agencies, for the Palestinian quest to reflect the international legal personality of the State of Palestine and its full membership in the United Nations. As a clear expression of adherence to the peace process and to guarantee the rights of our people in international law as an expression of rejection of the occupation, and what leads to the establishment of Palestinian State institutions on the ground and its role and duties as institutions under occupation, and also to strengthen the foundations of Palestinian persistence and their survival in their homeland, especially Occupied Jerusalem.

The Ministry believes that the Israeli incitement campaigns and the developing colonialism in Palestine reflect the absence of an Israeli peace partner. Also, the continuation of the Israeli occupation's rebellion against international law and international resolutions which proves that the Israeli right wing has no clear agenda for peace and has nothing to offer the Palestinian people except oppression, colonialism and an apartheid, to continue the collective repression and punishment of Palestinian citizens.

The Ministry affirms that Trump’s Declaration and sponsoring the Israeli extreme right, their policies, programs and positions prompted the Israeli government headed by Benjamin Netanyahu to persist in its rebellion against international resolutions and encouraged them to continue to thwart negotiations through different methods to solve the negotiations by force and unilaterally, thus leading to weakening the peace process and reaching a dead end.

The US administration should bear full and direct responsibility for his declaration, and should be aware of the grave consequences and dangers, not only in Palestine, but on the whole region, bearing in mind the full and direct responsibility of the Israeli Government for its serious violations of international law and the continuous crimes against the Palestinian people. The Ministry assures that the international community, and the United Nations are now under a decisive test, to preserve the remaining credibility in maintaining international peace and security and to abide by the principles on which the United Nations was founded, including its credibility in holding legal responsibility towards the situation in Palestine, and resolve the conflict peacefully.