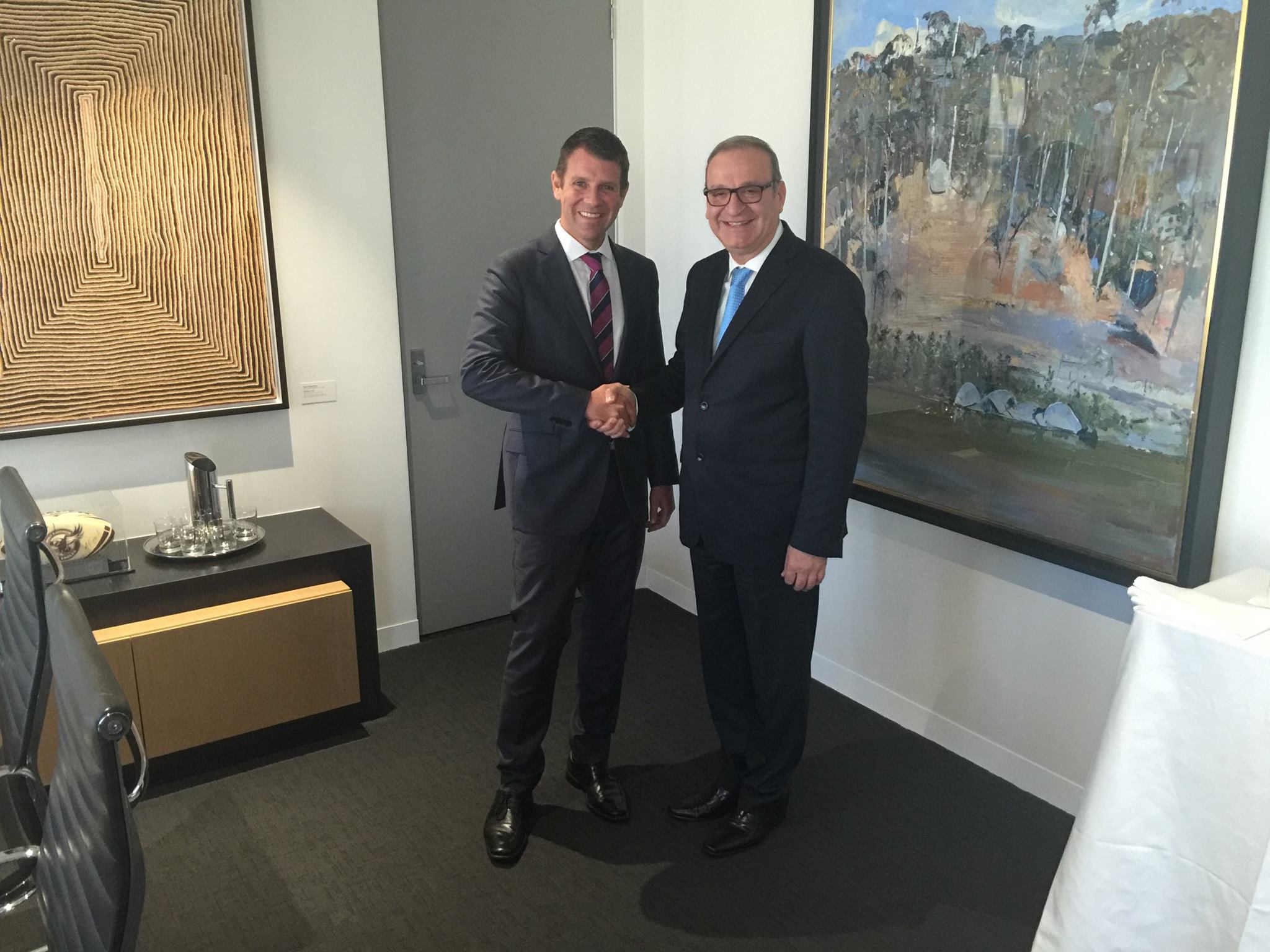 In preparation for the Hon. Mike Baird’s visit to Israel and Palestine, Ambassador Abdulhadi met with the NSW Premier to emphasize the importance of his visit to Palestine. The Ambassador emphasized the importance of witnessing facts on the ground and of expanding understandings of the key elements of the Israel-Palestine conflict.  The meeting, conducted on the 30th of March, saw the Ambassador and the Premier discuss the program , particularly the Premier’s interest in meeting with the Palestinian Foreign Minister as well as visiting the Aida Refugee Camp in Bethlehem.

H.E Izzat Abdulhadi stressed to the Premier the need to understand the root causes of the current cycle of violence, namely the Israeli Occupation and systematic violations of Palestinian rights. Ambassador Abdulhadi clarified the detrimental impact of illegal settlements for the two state solution, explaining that Israeli settlement expansion is creating a de facto apartheid system and a one state reality on the ground. The Ambassador highlighted that Israel cannot continue to identify as a democratic state, while its Occupation and discriminatory policies against Palestinians continue, and discussed the Palestinian position towards final status issues including Occupied East Jerusalem and Palestinian refugees.

An overview of the current economic and developmental situation in Palestine as well as the barriers imposed by the Occupation was provided to the Premier. The Premier expressed his interest in the status of youth employment and job opportunities in Palestine. The Ambassador explained that due to the Israeli Occupation, there are  many obstacles faced around youth employment, particularly with Israel obtaining full control of Area C, Israeli monopoly on borders, and Israeli exploitation of Palestinian natural resources such as water. Ambassador Abdulhadi stressed the importance of the Australian governments financial aid to Palestine, predominantly its AMENCA 3 Program, which aims to create jobs for youth and women.

The Premier spoke of his interest in pursuing an academic program between universities in Palestine and Sydney where such a program may include research cooperation, training and scholarships.

The Palestinian Embassy extends their appreciation to the Premier for taking the time to meet with Ambassador Abdulhadi and for visiting Palestine.