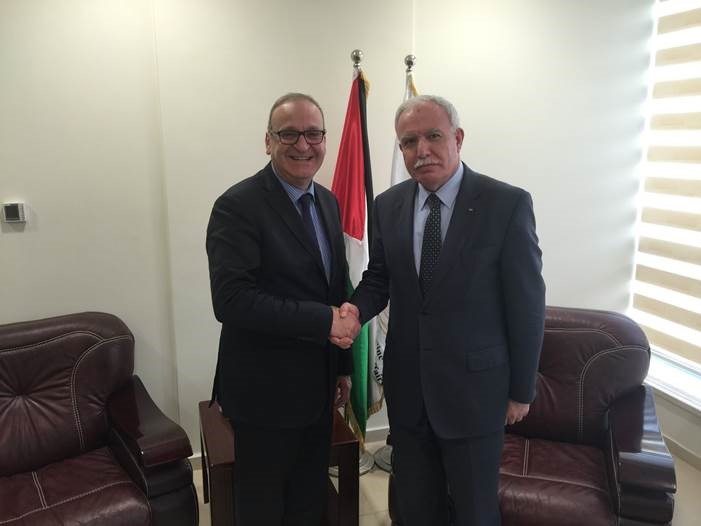 Continuing with his ambassadorial duties, H.E Izzat Abdulhadi traveled to Palestine in January to conduct a number of meetings with Palestinian officials, civil society groups and representatives of the Palestinian private sector.

The Ambassador communicated the activities of the Embassy, and elaborated on the diplomatic model used in Australia, which primarily focuses on program-led diplomacy. The  Foreign minister confirmed his support of this approach by stating he was pleased with the overall work and outcomes of the Embassy.

H.E Izzat Abdulhadi met with medical researcher Professor Paul Komesaroff from Monash University who is currently researching a potential health program for Palestinian children. A key outcome saw the Ambassador arrange a meeting between Professor Komesaroff, and the Deputy Minister of Health, and between professor Komesaroff and President Mahmoud Abbas to discuss the health needs of the Palestinian people. President Abbas raised the issue of funding and support for the Khaled El-Hassan cancer hospital in Palestine, and stressed that Professor Komesaroff addresses this subject with the Australian government to receive financial aid for resources and training.

Meetings were also held with a wide range of representatives of civil society organizations, which included those benefiting from the Australian financial assistance to discuss the best approach to implement projects funded through Australian aid. H.E Izzat Abdulhadi participated in several fruitful consultations with civil society representatives, where discussions around the vision and strategies for development and state building were the core focus.

The meetings with private sector representatives focused on identifying effective approaches to promote trade relations and investment opportunities between Australia and Palestine. Representatives showed great interest in expanding economic relations with Australia, and confirmed their commitment to investigating such avenues further.

Mr. Abdulhadi concluded his visit to Palestine with a meeting with the director of the Australian Representative office in Ramallah, Marcia Pius, to gain insight of the activities of the office. Focal point of the meetings included a conversation on the best approach to ensure effective communication and co-ordination between the Australian Representative office and the Palestinian Embassy in Canberra.