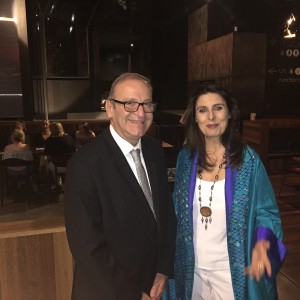 On the evening of 17 November, Ambassador Abdulhadi attended the opening reception for the Palestinian Film Festival 2016 at Palace Norton St Cinema, Sydney.

The opening film for the festival was "3000 Nights", directed by Mai Masri (pictured here with Ambassador Abdulhadi).

3000 Nights is the inspiring story of a Palestinian schoolteacher finding hope and strength against all odds while serving a long prison sentence. After she is falsely convicted for terrorist collaboration in the Israeli-Occupied West Bank, teacher Layla (Maisa Abd Elhadi) must serve a sentence that lasts 3000 nights. During her time in prison, Layla discovers that she is pregnant, eventually giving birth to the child despite the prison director's insistence on an abortion. Mai Masri's film provides a timely reminder of the injustices faced by Palestinian people – and women, in particular – living under the occupation. But more than anything, it's an affecting human story of motherhood, sisterhood, and solidarity. Despite Layla's dire circumstances, 3000 Nights offers a powerful portrait of human resilience.

Ambassador Abdulhadi will likewise attend and deliver a speech at the launch for the Palestinian Film Festival in Adelaide this evening.