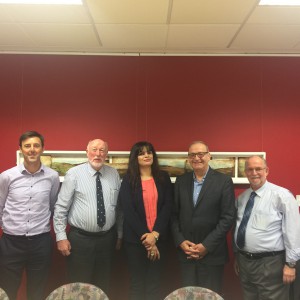 Ambassador Abdulhadi and First Secretary Ms Noura Saleh met with members of the Uniting Church and the Jewish Board of Deputies, who recently undertook a joint delegation visit to Palestine.

The members of this joint delegation briefed Ambassador Abdulhadi and Ms Saleh about their two week trip to Palestine and Israel, where they met with officials and civil society organisations from both countries. The objective of their visit was to deepen their understanding of the root causes of the Israel-Palestine conflict and to witness the facts on the ground.

Ambassador Abdulhadi welcomed the visit as the first of its kind from Australia and encouraged both sides to visit Palestine again in order to meet with Palestinian grassroots movements.

The members of the joint delegation expressed their satisfaction with the outcomes of their visit, although they identified some key difficulties facing the Palestinian people and obstacles in front of attaining just and sustainable peace in the region.