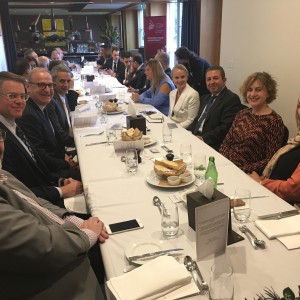 The Australia Arab Chamber of Commerce and Industry (AACCI) organized a business lunch on Monday March 26 in Canberra which was attended by the Arab ambassadors in addition to DFAT's newly appointed First Assistant Secretary for the Middle East and Africa Division, Ms HK Yu.

The lunch was hosted by the Chairman of the Chamber, Mr Roland Jabbour, who welcomed the invitees and briefed them on AACCI's latest activities and developments. He also urged the ambassadors to maintain support for AACCI's role in facilitating trade between Australia and the Arab World, and to identify and harness future opportunities.

Ambassador Izzat Abdulhadi thanked Mr Jabbour for AACCI's ongoing support to Palestine and assured him of the continued efforts to enhance the relationship between the Chamber and the Palestinian Embassy in Canberra.