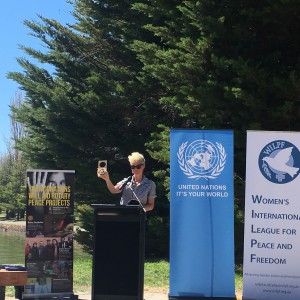 On Friday 21 September, Ambassador Abdulhadi and First Secretary Noura Saleh attended the gathering in Canberra for the UN International Day of Peace, hosted by the United Nations Information Centre (UNIC) and the Rotary Club of Canberra Burley Griffin. Mr Robert Tickner AO gave the keynote address and the ACT Chief Minister’s Rotary Peace Prize was formally presented. The audience also heard from members of the International Campaign to Abolish Nuclear Weapons (ICAN) who had just taken part in the Ride for Peace initiative from Melbourne to Canberra to call on the Australian government to recognise the UN Treaty on the Prohibition of Nuclear Weapons. There was also a focus on gender justice and female empowerment, and attendees were treated to a choir performance.

The day is dedicated to world peace, specifically the absence of war and violence, and is observed with a temporary ceasefire in combat zones to enable humanitarian aid access. It was established by a United Nations resolution in 1981 to coincide with the opening of the General Assembly’s annual session.