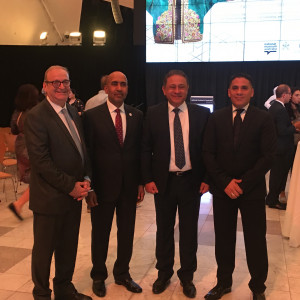 On Thursday April 19, Ambassador Abdulhadi and First Secretary Noura Saleh attended the opening event for the exhibition So That You Might Know Each Other: Faith and Culture in Islam at the National Museum of Australia (NMA) in Canberra. The event was hosted by the Museum's Director, Dr Mathew Trinca,  and Chair of Council, Mr David Jones, and was attended by a sizeable audience, among whom were members of the Arab and International Diplomatic Corps.

The exhibition features collections from the Vatican Anima Mundi Museum, The Sharjah Museums Authority and the NMA that include precious and intriguing objects such as traditional clothing, musical instruments, ceramics, jewellery and original manuscripts. Through this selection of items from Islam's different historical periods and cultural milieus, audiences will be able to acquaint themselves with the diverse legacy and achievements of Muslims throughout the centuries, and gain insights into their daily lives and enduring faith.