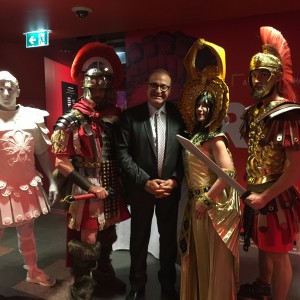 On Thursday 20 September, Ambassador Abdulhadi attended the opening of the National Museum of Australia’s (NMA) latest exhibition, Rome: City and Empire, in Canberra. The reception was attended by around 300 people, including members of the international diplomatic corps, and featured Dr Thorsten Opper, Senior Curator at the British Museum and head of its Roman section, and NMA Director Dr Mathew Trinca, both of whom formally inaugurated the exhibition by speaking about the significance of the Roman Empire’s status as the world’s first superpower and its enduring legacy.

More than 200 artifacts from across the ancient empire are on loan from the British Museum, giving Australian audiences glimpses into everything from the humble village life to the peaks of military conquest and expansion. The exhibition will run until 3 February 2019.