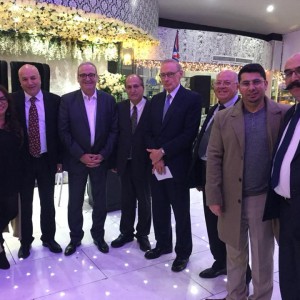 On Friday 18 May, Ambassador Abdulhadi was invited by the General Union of Palestinian Workers and the Australian Palestinian Club to observe the 70th anniversary of the Nakba (Catastrophe), and to celebrate the month of Ramadan.

It was an opportunity to reflect on Ramadan’s spiritual meaning, and also how 70 years of unceasing dispossession and murder, while leaving permanent scars, had failed to extinguish the flame of Palestinian self-determination. The event also allowed those present to remember all the Palestinian martyrs, especially those who were murdered by Israeli soldiers in Gaza just recently.

It was also an opportunity to discuss the latest political events, especially the move of the US Embassy to Jerusalem and its negative consequences for the peace and stability of the region. The Ambassador also discussed the lessons to be learned from Al Nakba, especially the importance of national unity and solidarity.