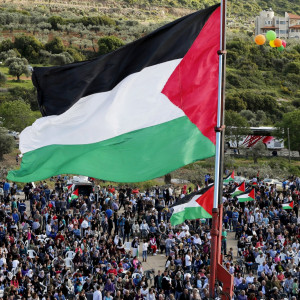 The Hon Mr Shaoquett Moselmane MLC organized an event in Sydney on Friday April 6 to observe the 1976 'Land Day' expropriations and murders. The observance occasion was attended by a large number of Arab and Palestinian community members to show their support and commitment to the Palestinian cause.

Mr Moselmane delivered a speech on the occasion highlighting the significance of Land Day in light of Israel's continued attempts to confiscate Palestinian land and expand its settlement project.

Ambassador Abdulhadi addressed the audience, explaining the several meanings of Land Day and its uniqueness in unifying Palestinians in Israel, the Occupied Territories and in the diaspora.

He commended the nonviolent protest in the Gaza Strip, the objective of which was to also commemorate Land Day, and condemned the Israeli brutality witnessed through the use of live ammunition against unarmed protesters. He also briefed the audience on the latest political developments regarding the Israeli-Palestinian conflict and, particularly, the dire consequences of President Trump's decision to recognize Jerusalem as the capital of Israel.