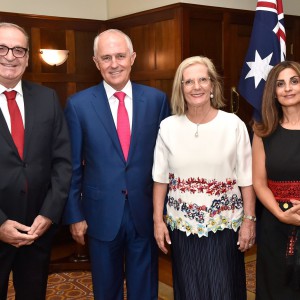 Prime Minister Turnbull delivered a speech highlighting the diversity and multicultural nature of the Australian society and praised the achievements of the aboriginal people, the first Australians and owners of the land.

It was an opportunity for Ambassador Abdulhadi to congratulate the Prime Minister of Australia Day and thanked him for his recent visit to Palestine.