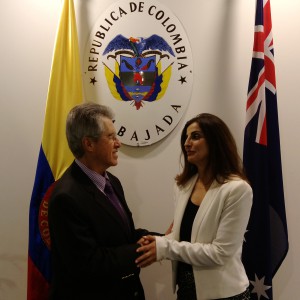 On Wednesday 15 August, Chargé d’Affaires and Counsellor Ms Suheir Gedeon delivered a letter of appreciation on behalf of Ambassador Abdulhadi to the Ambassador of the Republic of Colombia in Australia, H.E. Mr Jaime Bueno-Miranda, expressing the Palestinian government’s sincere gratitude to the Colombian government for its recent decision to formally recognise the State of Palestine.

Colombia is the 137th state of the 193-member United Nations to take this principled and courageous decision to restore diplomatic and international legitimacy to Palestine and its people. The decision to recognise the State of Palestine as a “free, independent and sovereign state” on 1967 borders was made by former president Juan Manuel Santos on 3 August during his final week in office, and was ratified last week by his successor President Ivan Duque.