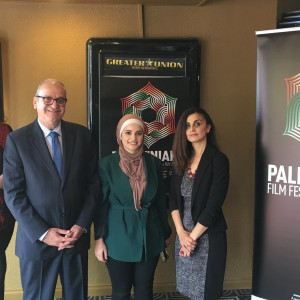 On Thursday 18 October, the General Delegation of Palestine to Australia, New Zealand and the Pacific (GDOP), in partnership with the Palestinian Film Festival Australia, organised the evening premiere of the film Wajib – The Wedding Invitation at Event Cinemas in Manuka, officially opening the Canberra leg of the festival.

The evening commenced at 5:30 pm with a cocktail reception followed by the screening of the award-winning film that balances comic relief with sober insights into the daily lives and experiences of Palestinian citizens of Israel. In attendance were members of the international diplomatic corps, Canberra’s Palestinian community, advocacy groups, and government officials.