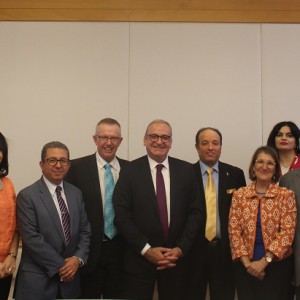 The Parliamentary Friends of Palestine at the Federal Australian Parliament in cooperation with the Palestinian Embassy in Canberra has organized a briefing on the consequences of President Trump’s decision to recognize Jerusalem as the Capital of Israel.

Ambassador Abdulhadi, accompanied by Counsellor Suheir Gedeon and First Secretary Noura Saleh, was the main speaker and briefed the Members of Parliament and some Arab Ambassadors, who attended the session, on the latest political developments on Israel Palestine conflict including President Abbas’s Peace initiative and the call for an international Peace Conference.  In addition, the Ambassador briefed the attendees on the grave consequences of the USA decision to cut off the aid to UNRWA and its impact on the social welfare, health and education of the Palestinian children.