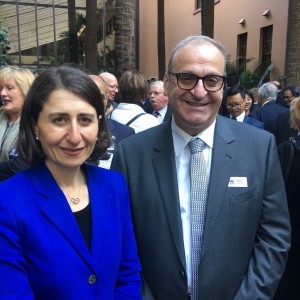 On Wednesday 7th of March, Ambassador Abdulhadi was invited by NSW Premier Gladys Berejiklian to attend the Anzac Memorial International Soil Project’s event at the Parliament House in Sydney.

The State of Palestine took the opportunity to contribute its own soil to this project and received warm appreciation from the Premier. The function was attended by members of the International and Arab diplomatic corps, many of whom also made contributions.

Following the collection of soil samples from 1600 war memorials in NSW as part of the Anzac Memorial Centenary Project (which involves an extensive refurbishment of Hyde Park’s War Memorial), the international collections represent the ground on which Australian soldiers fought and died during the Great War. The symbolic initiative, as articulated by Premier Berejiklian in her speech, intends to further recognize and appreciate the sacrifices made by Australians, including in the Middle East, by enshrining earth as a source of reflection and value for future generations.