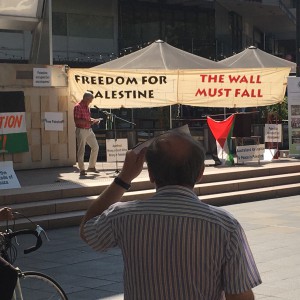 On Saturday April 21, members of Canberra's Palestinian community and their supporters from the wider Australian community attended the End Israeli Apartheid rally at Garema Place in Canberra City. The rally was part of End Israeli Apartheid Week and gained more impetus with the recent Israeli killings of unarmed protesters in the Gaza Strip, including that of Palestinian journalist Yasser Murtaja.

The rally's organizers, the Independent and Peaceful Australia Network (IPAN) and Australians for Justice and Peace in Palestine (AJPP), planned the event to highlight and condemn Israel's apartheid system and its symptoms. There was a particular focus on calling for an end to the siege of Gaza and to the indiscriminate killing of Gazans, the arrests, military trials and imprisonment of Palestinian children, the demolition of Palestinian homes, and the ongoing restriction of movement facing all Palestinians.