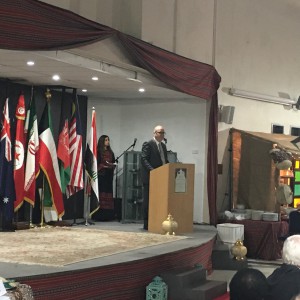 On 7 June, the Palestinian Delegation participated in the Organisation of Islamic Cooperation’s (OIC) first iftar dinner at the Canberra Islamic Centre in Monash. It was an opportunity for the diplomatic missions that comprise the OIC to unite Canberra’s Muslim community and members of other faiths in a spirit of understanding and friendship. Sixteen of the OIC members assembled stalls in which their culture and, most importantly, food were available for all to enjoy.

The evening was eloquently MC’d by Counsellor Suheir Gedeon, and Ambassador Abdulhadi gave a speech before the meal in which he acknowledged the special meaning of Ramadan as a time for reflection, charity and the value of family. He also praised Australia as a welcoming nation that embraces diversity and multiculturalism. Finally, he mentioned the sad and painful Ramadan experienced by Palestinians this year, particularly by those in Gaza in light of recent events.